New light rail in Bursa for students, patients and fans 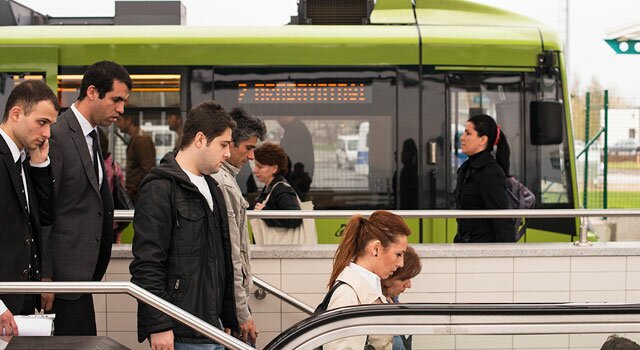 The busy north-western city of Bursa is proud of its heritage. It was the first capital of the Ottoman Empire and a lot of its historic architecture has survived. But it also means that Bursa is a city planned in the middle ages. Until recently, most public transport – i.e. buses and minibus taxis – carried its two million inhabitants through narrow streets built for horses, not internal combustion engines.

Bursa is also proud to be a green city, with many parks and a local citizens’ movement dedicated to protecting its green belt. So it was a very logical step – though by no means an easy one – for the city to introduce light rail, one of the cleanest and fastest modes of urban transport.

Bringing light rail to Bursa has been a massive project. Engineer Eren Kural, Bursa’s Head of Rail, says that consulting the community, planning the 40 km route, redesigning surrounding streets, changing the old pipes and cables along the way and extending the electronic ticket (which existed in Bursa long before London got its Oyster card) meant a lot of work and needed a lot of financing. This was obtained from commercial banks, a state bank and multilateral banks, including the EBRD (a €70 million loan plus technical assistance) and the EIB (€100 million).

The EBRD loan funded the branch of the light rail network that connects Bursa’s university, with its famous faculty of medicine and big hospital, to the city centre. At the busy, spacious University station, students in street fashions and older folk in traditional clothes get off the train and then safely walk to the campus via a subway. It’s a big change from the days when commuters had to run or limp from one crumpled bus to another to make their lecture or doctor’s appointment. “I have received so many emails and texts saying thank you for the new trains!” says Eren Kural.

Light rail is also firmly connected to the city’s dreams for the future.

“For Istanbul football teams, Bursa is a major nightmare,” says Cavit Cali, the head of the municipality’s finances and a big fan of the celebrated Bursaspor football team. In a few years’ time, Bursa wants to bid to receive major international tournaments. The city is already building a new football stadium – close to a new light rail station.