April 18th, 2013 by Mike Davey - Director for Turkey in Istanbul 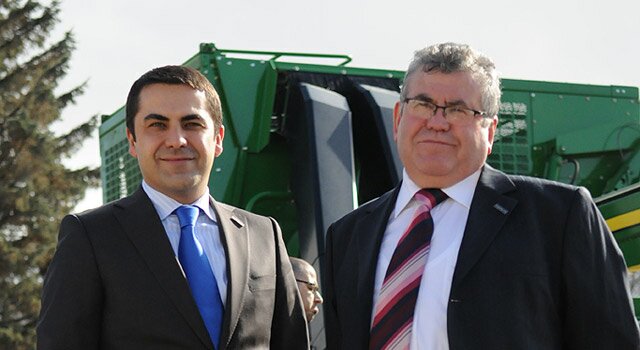 Hisarlar is a company with a dream that goes back a generation. Although they now make agricultural machinery tailored to Turkish farming conditions and supply parts to global giants such as John Deere of the US and Germany’s Atlas, they started as a one-man blacksmith business where you would go to shoe your horse.

Forty years ago, a young blacksmith called Fazli Turker used to dream of building a vehicle capable of negotiating the steep, rocky terrain around his home village, Hisarlar.
One day, as he was thinking about his dream machine, a farmer came to ask for his help: a doctor had told the farmer that he would die if he continued to work in an open tractor in all weathers.

So Turker made a cabin – the first for a Turkish-built tractor. Then he printed a leaflet promising that his cabins would “protect you from the heat and cold” and founded a company named after his village in central Anatolia. Today, Hisarlar produces tractor cabins with the most sophisticated modern safety features for all Turkish manufacturers, as well as making lots of agricultural machinery.

We do not speak the same language, but I knew immediately where Turker was coming from. I had the same love of tractors as a boy. We were born the same year (I am not telling you which) and were both second sons in big families (he had five brothers and sisters, I had seven).

Turker’s love of tractors grew into Hisarlar and the EBRD recently became a shareholder in the company by providing a joint investment with the Darby Converging Europe Fund III.* On a recent visit to a Hisarlar production plant, I was invited to sit in a very comfortable tractor cabin – something I hadn’t done for decades.

To this day, Turker does not have any special engineering education. His first encounter with mechanics and electricity was at the age of 10, when a travelling cinema came to his village.

But when he and his brothers founded the company, training and education and then research and development became central to their philosophy. They employ over 820 staff, out of whom 150 are certified welders and about 40 are engineers.

Several years ago, the company pioneered its first behind-tractor cotton harvester with John Deere. In 2011 they launched a research and development centre in Eskisehir – the first and only such centre for agricultural machinery in the country – and it soon won official endorsement from the government.

Today, the company’s CEO is Turker’s son, Zafer Turker. Recognising that his family’s company had come a long way from just protecting farmers against the heat and cold, he went to Japan to learn from Toyota and came back a fan of Japanese standards of operational excellence. As a result, Hisarlar rewards workers for ideas which save time and cut costs and boards that record progress and savings are everywhere at the company.

The company believes that Turkish agriculture will grow and so will their market. Currently, Hisarlar makes smaller machines for Turkish farmers, as standard-sized equipment is simply not economical. A government reform programme aims to consolidate land plots and create more economically-viable farms. When that happens, Hisarlar will be ready to produce bigger machines.

At the moment, however, they are looking to other countries to expand, particularly Russia. I hope the EBRD will be able to help companies like Hisarlar make their first vital contacts in Russia and our other countries of operations.

The EBRD has invested in the growth of Hisarlar’s agricultural machinery, cabin and metal components business.

But the founder did not forget the vehicle he was imagining on the day that farmer came to ask for his help. “Turkar”, Fazli Turker’s big dream, already exists and can be driven; it is the first Turkish multi-purpose mini-truck which can go almost anywhere.

*The investment in Hisarlar was executed through the EBRD’s Local Enterprise Facility (LEF). LEF is a €400 million proprietary vehicle for investments in SMEs in the Balkans, Turkey and the SEMED region. It benefits from donor support from Italy, the EBRD Shareholder Special Fund and the SEMED Multi-Donor Account. It provides debt, equity and quasi-equity.